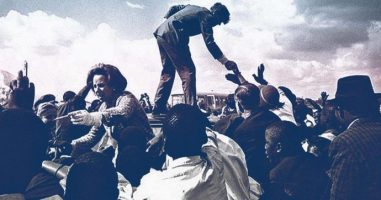 Robert F. Kennedy’s career in public service was distinguished by his willingness to join local activists in demanding change. Whether aiding the Freedom Riders in Alabama, encouraging anti-Apartheid students in South Africa or breaking bread with Cesar Chavez in California, Robert F. Kennedy believed in standing with those who stood against oppression. Robert F. Kennedy Human Rights continues his legacy of joining the brave women and men on the front lines of the struggle for justice. From lawsuits to lesson plans, their programs are designed to empower activists working for change from the ground up.

The Board of Directors composition encompasses leaders from varied sectors, including those in corporate, human rights, entertainment and the public sector. Members are identified and selected based on their demonstrated interest and commitment to social justice and advancing the legacy and vision of Robert F. Kennedy. Current members include Ethel Kennedy (Founder), Robert Smith (Vista Equity Partners), Harry Belafonte (Activist and Entertainer), Martin Sheen (Actor) and Joseph Kennedy III among others. The Leadership Council includes leaders such as Archbishop Desmond Tutu and former President, Bill Clinton.

Nelda Connors is the founder and CEO of Pine Grove Holdings, a privately held investment firm that has overseen transactions representing over $300 million. Connors has more than 25 years of technical and operating experience, primarily in the automotive and diversified industrials markets, having held high-level positions at Atkore International, Eaton Corporation, Ford Motor Company, and Chrysler Corporation. Her recognized expertise and sought-after strategic counsel have led to her inclusion on the public boards of directors of Boston Scientific, Delphi Technologies, Echo Global Logistics, and EnerSys.

Kimberly Davis is an executive vice president for the National Hockey League, responsible for social impact, growth initiatives, and legislative affairs. Reporting to Commissioner Gary Bettman, she exerts a positive influence over 32 NHL clubs’ owners and executives regarding decisions relating to culture, youth participation, and social impact in an effort to improve access to and availability of the sport as well as grow the league’s business for the long term. Davis is a trailblazer and change agent who has positively disrupted the financial industry and the wide world of sports during her illustrious 30-plus-year career. Driven by both data and a passion for progress, she has consistently provided structure and glide paths to help organizations realize their potential for sustainable business growth.

Thasunda Brown Duckett, chief executive officer of Chase Consumer Banking at JPMorgan Chase, is widely recognized as a leading executive in the financial industry. Building on her passion for financial inclusion and empowerment, Duckett drives the bank’s development of new tools, products, and thought leadership to build financial health and wealth for all consumers. She is the executive sponsor of JPMorgan Chase’s Advancing Black Pathways program and Fellowship Initiative, as well as a founding member of Women on the Move, which all offer women and people of color opportunities for mentorship and advancement in their personal lives and professional careers.

Cara Kennedy-Cuomo is an associate at 17 Asset Management, a global firm that designs and manages investments aligned with the 17 UN Sustainable Development Goals (SDGs). She is also a partner at Sahar Global Summits, where she leads the group’s diversity and inclusion division. Kennedy-Cuomo has also worked for Jeffrey Sachs on international development efforts, for which she lived in Rwanda, Malaysia, and Colombia. With Robert F. Kennedy Human Rights, she has joined delegations fighting for LGBTQ rights in Uganda, environmental rights in Ecuador, and protesting the ethnic cleansing of the Rohingya in Bangladesh and Myanmar. Domestically, she has also joined the organization’s initiatives fighting on behalf of farmworkers in Florida and upstate New York, and the Mass Bail Out program in New York City.

Betty Liu is the chief experience officer at Intercontinental Exchange and executive vice chairman for NYSE Group, a wholly owned subsidiary of the exchange. In both roles, Liu enhances and innovates the customer experience across the entire organization and helps elevate relationships with the C-suite of the exchange’s thousands of business partners. Prior to joining the NYSE in 2018, Liu was an award-winning business journalist, anchoring Daybreak Asia and In the Loop for Bloomberg Television. Prior to the NYSE acquisition, Liu served as founder and CEO of Radiate, an educational tech start-up that empowers leaders with expert advice and continues to scale through NYSE’s platforms today.

Sushma Raman, executive director of the Carr Center for Human Rights Policy at Harvard Kennedy School, brings a rich and diverse background in philanthropy, human rights, and social justice through her work in the U.S. and globally with the Ford Foundation and the Open Society Foundations, as well as her experience leading human rights programs, philanthropic collaboratives, and social justice foundations. Raman has served as a judge for the Robert F. Kennedy Human Rights international human rights award and has taught graduate public policy courses on global civil society, the state, and the NGO sector; intersectoral leadership; and nonprofit policy and management at the University of Southern California and the University of California at Los Angeles.

Maryann Turcke is the chief operating officer of the National Football League, overseeing all facets of the operation including marketing, technology, social and digital media assets, brand, global events and corporate functions including human resources, and public and government affairs. Prior to the NFL, she was president of Bell Media, Canada’s premier multimedia company with leading assets in television, radio, out-of-home advertising, and digital media, where she leveraged Bell Media properties and brands across all platforms to support its strong position in the competitive advertising marketplace. Turcke also serves on the board of directors of the Royal Bank of Canada and is an active community member of Queen’s University, serving as chair of its Smith School of Business Advisory Board and in contributing to the leadership of the capital campaign for its Faculty of Engineering and Applied Science.

Randi Weingarten is president of the 1.7 million-member American Federation of Teachers, AFL-CIO, an organization that champions fairness; democracy; economic opportunity; and high-quality public education, healthcare and public services for students, families and communities. Weingarten has launched major efforts to place real education reform and community engagement high on the nation’s and her union’s agendas, creating the AFT Innovation Fund to support sustainable, innovative and collaborative education reform projects, including community schools and career and technical education programs; transforming teacher evaluations into a tool for continuous improvement; and overseeing the development of the AFT’s Quality Education Agenda, which advocates for resources and reforms that help all public schools to be places where parents want to send their children, educators want to work and where students thrive.