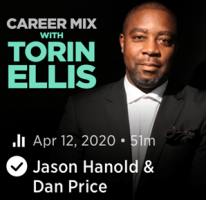 In this transcript from the 4/12/2020 interview of Jason Hanold, CEO of Hanold Associates, on SiriusXM Career Mix with Torin Ellis, Jason shares his thoughts on the evolving role of the CHRO (3:36 mins)

You’ve said in the past that you believe the new Chief Human Resources Officer (CHRO) and even that Chief Diversity Officer (CDO) has a pathway towards that executive, that Chief Executive Officer (CEO), that top spot. Do you still firmly believe that or have the lag in progress and results kind of tinkered at that position you took?

I absolutely believe in it—thank you for asking the question. It will come in time, but it’s really dependent on a couple of things. And to me, it’s very similar to back even 10 years ago, it was unheard of to have a Chief HR Officer sitting on a public company Board of Directors. And now you have dozens of them. And to me, there’s a lot of conversation in the media about the need for more diversity, both ethnically and from a gender perspective, more women CEOs in Fortune 500 organizations. Well, you have to appreciate the fact that it’s the board that hires the CEO, they fire the CEO, they compensate the CEO, they decide how they’re going to retain the CEO, and most importantly, they decide how they’re going to develop future CEOs within the organization.

If you take that and appreciating that there are more women on public boards than ever before, there’s more diversity on public boards than ever before. The mind and body thinking about the future CEO is more diverse and so that’s a great indicator that they’re going to continue to think more broadly about CEO candidates. Now, if there’s a need, and there is a need, to have more diversity in that role, if you then look at the leaders under the CEO, by far the most diverse function is that Chief HR Officer role. Over 66% of the Fortune 100 Chief HR Officers are women. In the FTSE, in London and the UK, 66% are women. It’s the same ratio and that spans globally into developed nations and organizations. And what you also find is, arguably, the CHRO has the highest degree of EQ on that executive team. And what is required of that CEO going ahead, it’s absolutely a strong EQ to go along with that strong IQ and business acumen.

The more that Chief HR Officers are developed broadly across the enterprise, the more that they’re coming to the table with a deep financial analytic capability with broader business acumen. These are your future contenders. And fundamentally, I think some of the strongest contenders to be our future CEOs.

I agree with everything that you’ve said. I guess my only insertion there is that I would love to see these organizations, all organizations across the industry, to do a better job of increasing that board diversity, that representation. You’re absolutely right. It’s at a level that we’ve never seen it before, but it’s still so paltry in the overall scheme of things, so I love your optimism. I love the strategy that you just illustrate. I’d love to see the boards themselves to become even more diverse. And then I believe that we probably are on a very, very firm path to doing an incredible job all the way down through an organization from an inclusion and representation standpoint. I love that.